This information is good for anyone that is premed 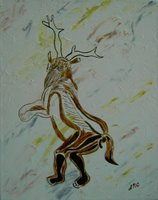 A shaman or medicine man is someone who can talk to spirits, both good and evil, and get them to do his will. He can travel through the spirit world, cure the sick, see the future, make a woman fertile and find good places to hunt or fish. He practises magic, white or black, and is sometimes the leader of his people, especially in war.

Shamans are common in societies that make a living by hunting or herding animals. They are found in Siberia, Australia, Borneo, India and North America.

In what follows I am thinking mainly of the shamans of Siberia, who have been the best studied, but shamans are more or less the same throughout the world. That is an amazing fact if you suppose that shamans are making it all up. If they are making it up, why are they so alike?

This site uses Akismet to reduce spam. Learn how your comment data is processed.

This is a text widget, which allows you to add text or HTML to your sidebar. You can use them to display text, links, images, HTML, or a combination of these. Edit them in the Widget section of the Customizer.
%d bloggers like this: